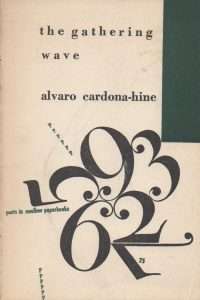 Alvaro Cardona-Hine has become known to the world primarily as a visual artist, but his first book was this small gem (Swallow Press, 1961). In his introduction he pays homage to the Zen orientation that was currency for the genre at the time, but his own work shows a broader taste. Add his evocative and charming illustrations, hints of what his larger-scale work was to become, and you have a unique early document in the development of ELH.