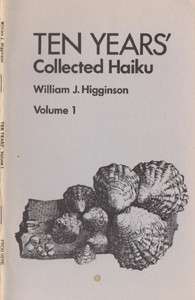 William J. Higginson’s enormous contributions to the study of haiku and its relatives sometimes eclipse his gifts as a poet. By 1987, when this chapbook was published (From Here Press), he had already 10 years of published work to draw upon, as well as an interesting story to tell on how he came to the genre, to be found here.