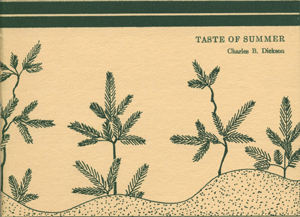 Charles B. Dickson’s work dropped out of view for a time, and perhaps exhibiting his work here will help people reacquaint themselves with his consistent quality. This attractive chapbook was published by Skyefield Press in 1988.