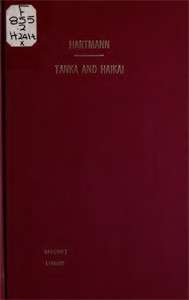 Sadakichi Hartmann was friend to Walt Whitman and Ezra Pound, and author of the first primer of haiku in English, this limited edition volume (Bruno’s Chap Books, 2016), which features 9 tanka and 3 haiku (numbered, oddly enough, I, III, and IV). Are they his own work, or transcriptions of Japanese originals? The debate continues . . .