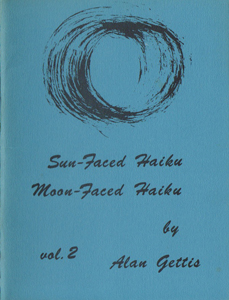 Alan Gettis was, like so many that have been drawn to haiku in the West, a devotee of Zen and a practicing psychotherapist, and these related interests strongly mark his poetry. This chapbook (1982) is subtitled “Volume II,” indicating that it is his second chapbook (the first, Snowed In, also was published by High/Coo Press), and follows a similar format: translations of Japanese haiku, followed by a short gathering of original poems, from which our selections are chosen.