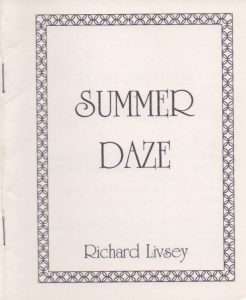 Richard Livsey had a brief fling with haiku in the late 1990s, producing a quartet of light-hearted chapbooks, of which Summer Daze (Funky Diction Publishing, 1997) was the second. Despite his relative inexperience in the genre, Livsey (not to be confused with the Welsh CBE) did achieve some poems of note, as the examples below suggest.