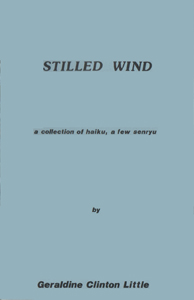 Geraldine Clinton Little (1923-1997) was widely known as a lyric poet before she came to haiku, and this background is evident in her work. She taught creative writing, fiction and poetry, and published in all these genres, as well as literary criticism. Of her many haiku chapbooks, this one (Bonsai Press, 1977) is perhaps typical: full of sharp observation, mordant wit, and heartfelt homage.