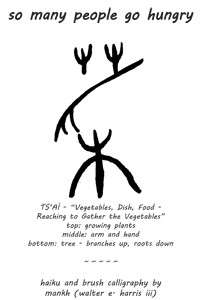 Mankh (aka Walter E. Harris III) is one of the gentle souls of haiku, and has been practicing his craft and his Buddhist beliefs through haiku and into the world through his many public deeds and publications, like this one (self-published, 2014).

Book of the WeekMankhso many people go hungryThe Haiku Foundation