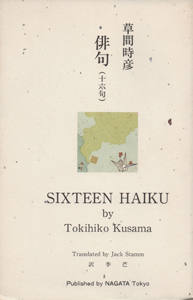 Tokihiko Kusama produced this chapbook (Nagata, 1992) at the beginnings of Japanese interest in exchanging haiku ideas with poets from other cultures. It was fashionable in those days to offer such a volume, and this one, modestly selecting a mere handful of poems from a lifetime’s involvement with the genre, and in translation by the esteemed Jack Stamm, is a particularly elegant example.