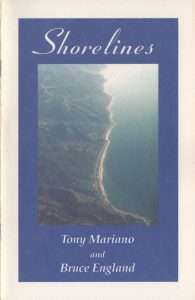 Tony Mariano and Bruce England were, by their own admission, two haiku novices in the late 1990s whose ambition was to create a chapbook to achieve some small degree of presence in the English haiku writing world. The result was Shorelines (Small Poetry Press, 1998), wherein they share space, but interestingly do not indicate whose work any individual poem might be. This (egoless?) model was adopted on a couple of occasions following, but remains a most intriguing process.