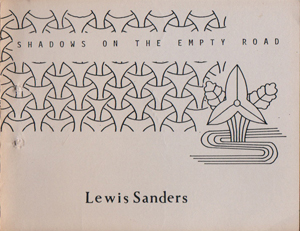 Lewis Sanders edited The Red Pagoda in the 1980s, which reflected his strong interest in classical Japanese culture and nature-based poetry. It’s a bit surprising, then, to encounter his own collections, such as this one (adVance Press, 1985), which, though infused with natural imagery, are much more engaged with the human condition, and the interpretation of those natural images as human metaphors.