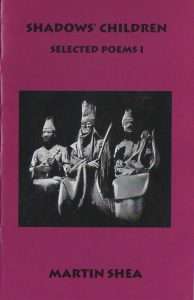 Martin Shea wrote, in the 1970s, some of the most powerful and unpredictable haiku in English, and so it’s worth our while to see what he’s been up to in later years. Shadows’ Children I (Lembeth Hall, 2011) is the first of a series of his most recent work in haiku, and though it has some odd presentation qualities (it employs a font that is all caps, for instance, as well as bold) the work is nevertheless striking and unique.