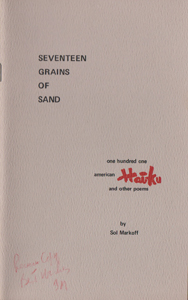 Sol Markoff came to haiku through his interest in Japanese arts, and especially painting. He studied with Minoru Kawabata in New York City in the 1970s, and in this volume (Haiku Moments, 1976) fuses his Eastern inclinations with his Western realities. The result is interestingly typical of the times, a time just before the momentum of the haiku movement would take the genre in a different direction.