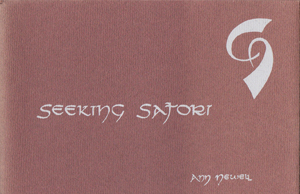 Ann Newell published this sumptuous book to celebrate the memory of her friend, the artist Joyce Jo Bashein (forty branches up publishing, 1985). It is not a book of haiku, but shares its sensibility, and many of the lyrical passages can be read as such. The book concludes with a pair of tanka, and of course Newell went on to publish books of haiku. In this volume we can see her first movement towards the genre.