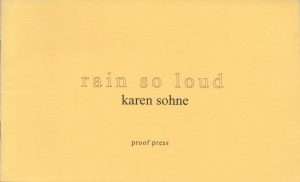 Karen Sohne is a familiar name to haiku aficionados, a mainstay in the major journals in the decades ending the last century, when she produced her best work. rain so loud (proof press, 1994) is a product of this period. Particularly of note is her championing of the two-line format, a comparative rarity in haiku but neatly handled on multiple occasions in this volume.