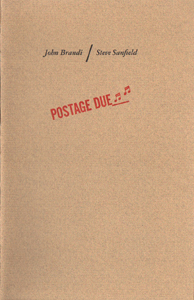 John Brandi and Steve Sanfield have collaborated on many projects, and it might seem as though their voices meld into a continuity. Which is the working premise of this volume ((Backlog/Tooth of Time Books, 2011) where poems are not identified by author, but presented in an ensemble voice, a voice that is knowing of the local and responsive to the cosmic.