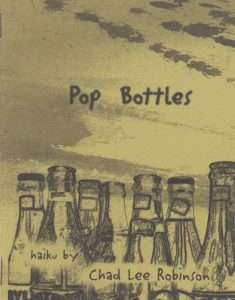 Chad Lee Robinson from the very beginning has evoked striking scenes of the American West and Midwest. Pop Bottles (True Vine Press), his first chapbook, from 2009, is no exception, and illustrates that he has always known what it was he wished to convey, and already had the ability to convey it. Given the brevity of the book, we are offering only two samples, but of course the whole book is but a click away.