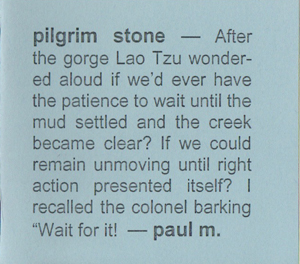 paul m. is the nom de plume of Modern Haiku editor Paul Miller (sorry to out you, Paul . . .). As an author he has produced, among other things, a series of chapbooks such as this one (self-published, 2008), often unified by a theme. There emerges from such work his unique, understated and resonant voice, and a special way into his subject one isn’t likely to forget.