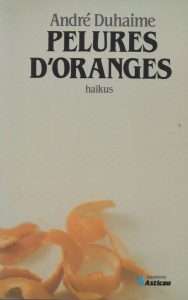 André Duhaime has been producing quality haiku in two languages for more than 4 decades. Pelures d’Orange / Orange Peels (Éditions Asticou, 1987) is an excellent example of his work, a flip book that reads in French in one direction and English in the other. It’s a fascinating practice to compare the two versions, suggestive of the adjustments a good poet can make in humor and acuity to achieve the nuance of a moment held in common between two sensibilities.