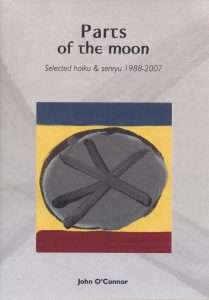 John O’Connor, who died unexpectedly in 2015, was one of New Zealand’s strongest poetic voices, in long verse as well as haiku. Parts of the moon (Post-pressed, 2007) is his personal selection of 20 years of haiku publication, characterized by an aptitude for compression, a trenchant humor, and a keen interest in typographical experimentation (hard to reproduce here, so you’ll need to look at the whole book).