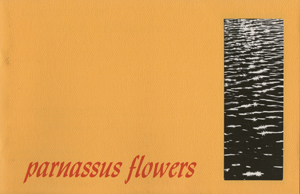 Robert Mainone has argued for the traditional approach to haiku—formal structure, nature content, and a sense of the ineffable—for 6 decades, and never more compellingly than in this beautiful self-published chapbook (1965), featuring charming b&w photographs by Larry West.

Again and again
the lightning’s light reminds me
of such earthly things.

Forests of my youth,
as one with sun and earth and
there I wander still.

The paths of stars—
something remembered vaguely in
recesses of the mind.

By my fireplace
for my companions: nightwind, stars,
and this full moon.