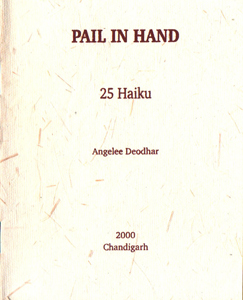 Angelee Deodhar, more than any other single person, is responsible for bringing Indian haiku to the attention of the world community. She has served as poet, editor, organizer, translator and representative around the world for this cause. These poems, privately published in 2000 for the World Haiku Festival held in London, show an engagement with the human world and a sensibility well-attuned to the genre.