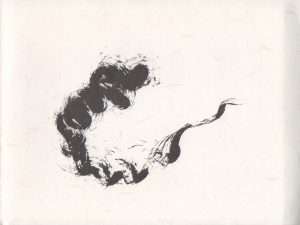 Suezan Aikins produced a series of hand-written (though mechanically reproduced) and hand-bound chapbooks in the 1990s, of which opening (Prospect Press, 1998) is a good representative. She is know for her evocative and occasionally colorful illustrations as well as her poems, which are usually terse for their time, sharply etched and often persuasively moving.