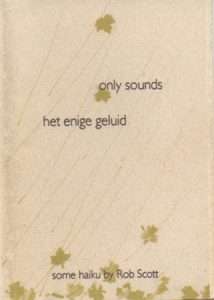 Rob Scott, a peripatetic haiku poet now located in Sweden, has spent considerable time in the Netherlands, and this tiny volume (’t Hoge Woord, 2001) is from the Radijs Series that appears in Dutch and English. These early poems already display many of the characteristics of Scott’s later work: a feeling for the uncanny, an evocative way with scene-setting, and a knack for finding the right word.