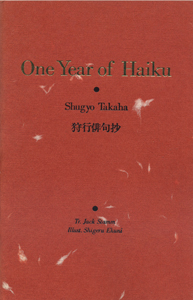 Shugyo Takaha is the President of the Haijin Kyokai (Association of Haiku Poets), and by virtue of this, the President of the Museum of Haiku Literature. Here’s a sampling of his work, from a bilingual book self-produced in 1997 for the HIA-HSA Conference in Tokyo. Translations by Jack Stamm.