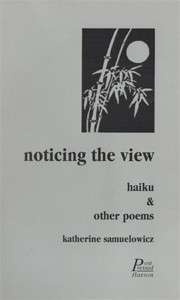 Katherine Samuelowicz has been a central figure in Australia’s haiku growth in recent decades, both as an editor and as a well-respected poet in her own right, as evidenced by this strong collection of haiku and other poems (PostPressed, 1999).