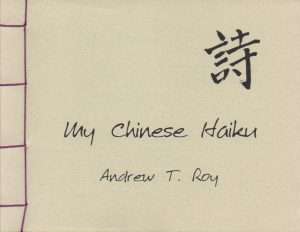 Andrew T. Roy explains in his introduction that he “wrote a good many of these haiku during [his] forty-two year stay on mainland China and in Hong Kong as a missionary, from 1931 to 1972.” This small, holographic, hand-bound chapbook (designed and printed by Rosemary C. Anderson, 2001) was in honor of Dr. Roy’s 97th birthday. There is a Chinese quality to the poems, as they are perhaps slightly more expansive and philosophical than is usual in Japanese (or Western) examples.