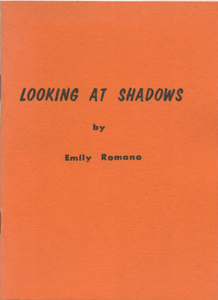 Emily Romano’s work in this modest chapbook, self-published in 1979, gives a good idea of the state of the art at the time. Her skillful handling of the 5-7-5 or near-so form is among the best of the day, feeling fluid and unforced, which, as those who have tried the rigorous syllable count know, is no easy feat.