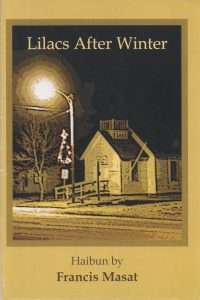 Francis Masat, who died at the very end of 2014, came to haiku, and, especially, haibun, late in his life, and almost immediately was widely published. Lilacs After Winter (Modern English Tanka Press, 2008) presents some of his best-loved work in the genre, from which we have extracted the sample poems below, which can provide, of course, only a taste of what the whole haibun are like.