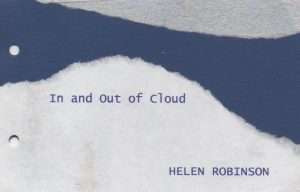 Helen Robinson is a strong voice from northern England, but her work is little known here since she publishes almost entirely in UK journals and in handsome, privately produced chapbooks such as this one (self-published, 2001). Her adherence to a traditional content with a Zen-infused spirit is among her most noticeable traits.