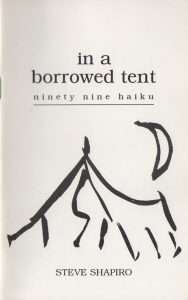 Steve Shapiro was a British poet who came to haiku in the 1960s, swept up in the wave of haiku awareness brought on by its discovery by the Beats. in a borrowed tent (The Firfield Pamphlet Press, 1994) dates from much later but is still infused with the Zen awareness to be found in R H Blyth’s writings and the practice of such poets as Snyder and, especially, Kerouac. This chapbook features the poet’s charming and quirky line drawings as a bonus.