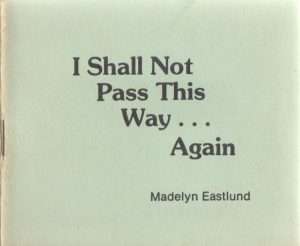 Madelyn Eastlund was one of the most prolific haiku poets of the early days of the haiku movement, appearing in virtually every journal and haiku publication of the time. This brief chapbook (self-published, 1983) is her only book, and shows her to be a good representative of the norms and sensibilities of her time.

Book of the WeekI Shall Not Pass This Way . . . AgainMadelyn EastlundThe Haiku Foundation