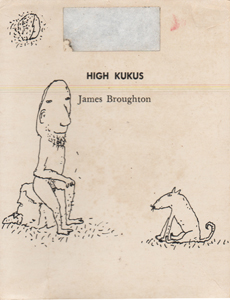 James Broughton offered this oddity in 1968 (The Jargon Society), at just the time when The Haiku Society of America was being formed. The disparity of understanding between the Haiku Community and Popular Culture is apparent in these poems, which read more like Tom Swifties, and rely on a kind of stereotype of “out there” culture for their effect. A useful historical placemarker.