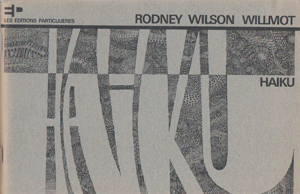 Rod Willmot lives! Though he has stepped away from the haiku scene a number of years ago, his contributions as poet, publisher and organizer have long been appreciated. Here we view him just as he was entering the haiku world, in his first chapbook (Les Éditions Particulières, 1969), hand-scribed (after much practice, he says) and printed on moss-green paper with a cover that embodies that era. You can feel the exuberance of youth meeting life on every page.