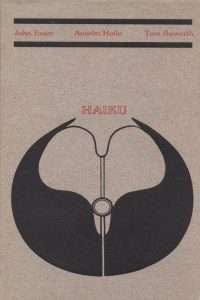 John Esam and Anselm Hollo and Tom Raworth undertook an interesting experiment (for Trigram Press) in 1968, sharing space to reveal their understandings of what was possible in that recent import, haiku. The results show the range of the genre, and justify the shared format, and the book has had a significant impact on how haiku came to be practiced, particularly in the UK.