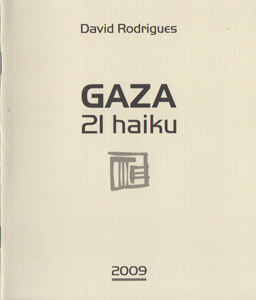 David Rodrigues tackles a millennium-old problem in his chapbook Gaza (self-published, 2009), and while he has no expectation that his 21 poems will solve the situation there, he offers them as moments of compassion and solidarity. His recurrent final line resounds like the chorus of a song, and through repetition gathers momentum, unifying the whole into a prophetic sequence.