Billy Antonio is a school teacher and was born in 1975 in San Carlos City, Pangasinan, Philippines. His poetry has won international recognition, including first places in the European Kukai and Shiki Kukai. 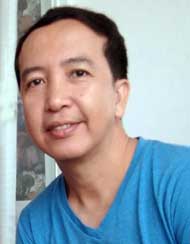 He is a Dwarf Stars Award nominee and his poems have been translated into several languages. Samples of his haiku include:

staring at the branch long after the birdsong

the length of a train whistle long goodbyes

doldrums
a ship
in a bottle

what remains after this blackhole