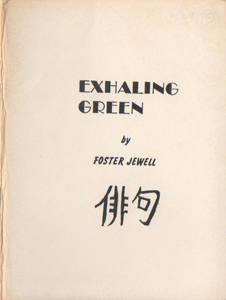 Foster Jewell was an early editor of American Haiku, the first journal dedicated to English-language haiku in the world, and a strong traditionalist voice, as exemplified in this lively chapbook from 1980 (Sangre de Cristo Press).