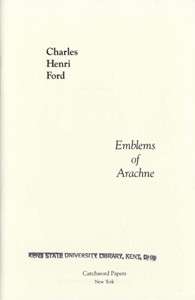 Charles Henri Ford has written some of the strangest—and yet most compelling—haiku in the language. His occupation is not with haiku sensibility, however received, but with his own full-blown sense of the dramatic, couched in a awareness of the classical themes. The results are unlike anything else (Catchword Papers, 1986).