In addition to his talents as a poet, Akito Arima also served education and science as president of the University of Tokyo, president of the Institute of Physical and Chemical Research and was Japan’s Minister of Education, Science, Sports, and Culture (1998-2000). 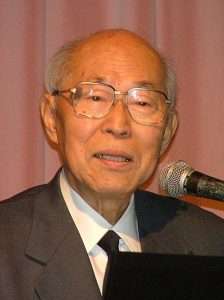 His poems reflect the perspective of a world traveled scientist and William J. Higginson states that Akito “excels in writing haiku that are clear, clean, and true. Their simplicity and directness mimic those of Basho.”

Some English translations of Akito’s haiku include:

through the keyhole
the sea fog quietly
flows in

one penguin
falls behind the flock—
spring moon