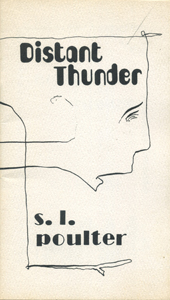 S. L. Poulter was an early advocate of formal variety within the traditional haiku genre. He essayed the rarest of haiku formats—the occasional two-liner—along with four-liners, and the cantilevered middle line may be his invention. This chapbook was a product of Peacock Press in 1974.