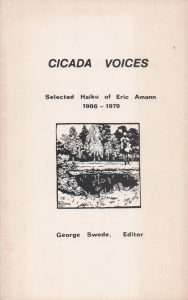 Eric Amann, who died last year, was one of the earliest and best editors of haiku in English. He was a strong advocate of haiku as a Zen vehicle, and is probably best known for his defense of his position in The Wordless Poem. He had to be persuaded by George Swede to permit his poems to be gathered together, and the result was this volume (High/Coo Press, 1983).