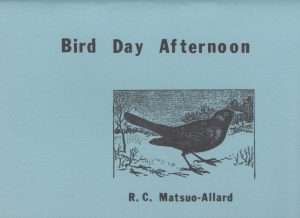 R C Matsuo-Allard remains an enigmatic figure from the early days of the haiku movement, but his impact has never been more apparent. It was in Bird Day Afternoon (High/Coo Press, 1978) that he first introduced his experiments with monoku (that is, haiku in English laid out in one line), a technique that has come to be a second norm for the genre.

Haiku featured in the Book of the Week Archive are selected by THF president Jim Kacian, and are used with permission.