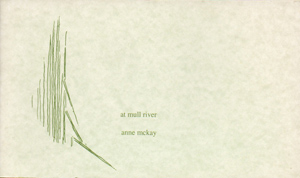 anne mckay’s lyrical approach to form in haiku has had no equal, and nearly all her poems are instantly identifiable. Those contained here (wind chimes press, 1995) are characteristic, in her usual colorful vein.