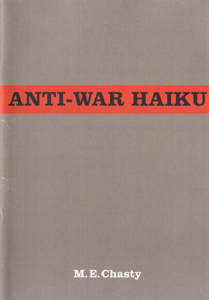 Mike Chasty’s thematic chapbook (self-published, 2006) embraces a topic that concerns us all, and that hasn’t become less pressing since he essayed it. It would be interesting to test his hypothesis (back cover) but we’ve never known a moment that might act as a control.