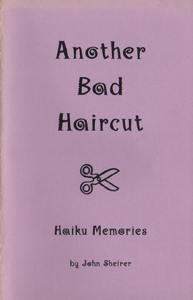 John Sheirer was a shooting star through the haiku sky in the late 1990s, focusing on the humorous aspects of life, and especially family relations. This volume (Riverstone Books, 1997) gives a goodly sampling of his major preoccupations in his mature style.