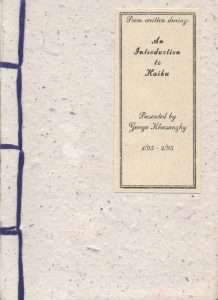 George Klacsanzky taught haiku with an indelible Zen tang, evident in his own work and, as is apparent here, that of his protégés. An Introduction to Haiku (self-published, 1995) selects poems written during a haiku workshop held at a Poulsbo (Washington) café in January and February 1995.