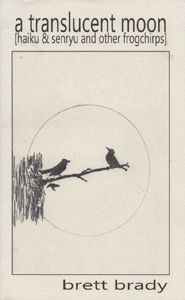 Brett Brady has been musician, poet, director and author in his varied career. His haiku is probably best described as sono-mama, “things just as they are,” but his take on the “isness” is much informed by his cheeky sense of humor, and a gentle way with things and people, much in evidence in his latest volume (Finishing Line Press, 2013).

in the clouds
the crown of a giant
redwood

nude beach . . .
everyone’s got something
to hide

ex-monk
raking gently over
the sandtrap

an orchid
more beautiful
in her palm

gray beach . . .
a stray dog responds
to the wrong name