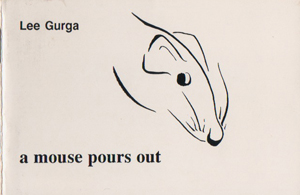 Lee Gurga was Robert Spiess’s successor as editor of Modern Haiku and president of The Haiku Society of America, among his many contributions to the genre, but he is best known as a poet. This earliest of his chapbooks (High/Coo Press, 1988), though modest, is in some ways still his most satisfying collection, the poems accompanied by charming drawings by his sons A.J. and Alex, and a moving nostalgia for a more rooted life maintained throughout. (You may wish to check out Bill Ramsey’s R’r essay, “From R. H. Blyth to Richard Gilbert:The Postmodern Turn from Essence,” which has a useful commentary (p. 44) on the title poem of this chapbook.)