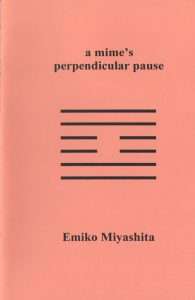 Emiko Miyashita is well-known as a translator of Japanese haiku and tanka, but her own work is perhaps less often seen. a mime’s perpendicular pause (King’s Road Press, 2005) is part of King’s Road Press’s Hexagram Series, and is worthy of its company, showing the poet to be ensconced in two cultures and capable of expressing her circumstances in both.